#BuildingLife – Buildings need to halve their emissions this decade 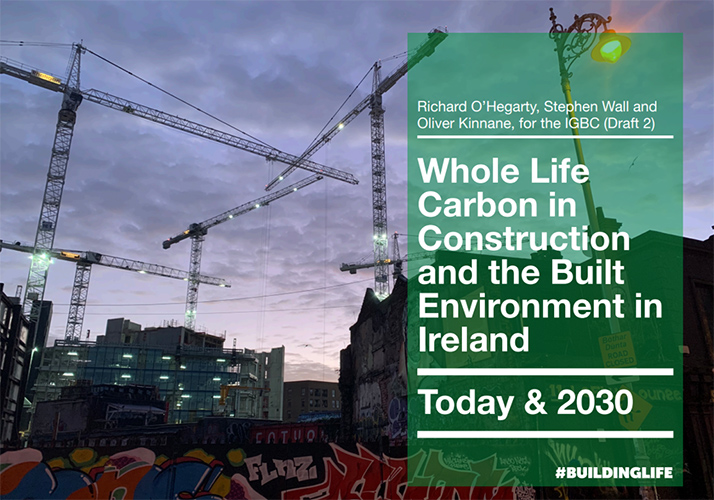 A UCD report commissioned by the Irish Green Building Council (IGBC) estimates that the construction and operation of buildings account for 37% of the country’s greenhouse gas emissions, the same as agriculture.

Just under two-thirds (23%) of these emissions come from operating buildings, but more than a third (14%) come from the manufacture and transporting of building materials and construction of buildings – usually referred to as embodied carbon (All the activities of procuring, mining, harvesting raw materials, transforming these materials into construction products, transporting them to site and incorporating them into a building, and subsequently maintaining, replacing and removing and disposing of at the end of their life). The report shows that these embodied emissions will increase significantly if housing and infrastructure plans for the rest of the decade are carried out in a business-as-usual fashion, effectively cancelling out the emissions savings being made by the ongoing switch to renewable energy.

To address this issue, the IGBC, in close cooperation with key stakeholders, has developed a Roadmap to decarbonise Ireland’s built environment across its whole life cycle. The Roadmap aims to outline the legal, technical, and material changes we need to see this decade to halve the construction sector’s emissions by 2030.

The legal and regulatory environment

In 2021, the EU published the Level(s) framework with the aim of creating a common language for assessing and reporting on the sustainability performance of buildings across their whole life cycle. Level(s) includes an indicator on whole-life carbon assessment, and it is already being used to assess projects under the EU Taxonomy. The Taxonomy aims to direct investment toward sustainable projects. In simple terms, the more environmentally-friendly a project is, the easier it is to obtain funding at a lower interest rate. Many certification schemes in Europe, including Ireland’s national certification for sustainable residential development, the Home Performance Index, are being aligned with Level(s).

As well as the financial markets, public procurement should contribute to a reduction in embodied carbon emissions. Level(s) is referenced in the EPA Green Public Procurement (GPP) guidance and the recent update to the National Policy on Architecture. As part of the review of the Capital Works Management Framework, the Office of Government Procurement (OGP) is implementing the International Cost Management Standard Framework (ICMS3), which accounts for the interrelationship between construction costs and carbon emissions in reporting templates. Once implemented, it will enable carbon reporting throughout all construction projects’ lifecycles. Within the next five years, reductions in embodied carbon emissions will be directly driven by building regulations. For the first time, the revised Energy Performance of Buildings Directive (EPBD) will include requirements for whole-life carbon (WLC) assessment, aligned with the Level(s) framework. Similar requirements already exist in France, Sweden, Finland, the Netherlands, and the UK. The industry-led Part-Z campaign to include WLC in building regulations in the UK gives a taste of what the requirements may look like.

Transitioning to a whole-life carbon approach may mean an expansion of the quantity surveyor role to include the carbon as well as the financial cost of materials, or it may lead to a new specialised role in advising on materials impacts and where the greatest savings in emissions can be made. Either way, there will be a need for education to understand the concepts and solutions and tools to help track and reduce impacts.

The IGBC offers the free-to-use Carbon Designer for Ireland tool, an early concept stage tool for estimating the carbon impacts of sketched-out plans before much detail is known. The IGBC runs regular courses on whole-life carbon assessment of buildings and how to use more sophisticated software available at OneClickLCA (www.OneClickLCA.com), the European market leader.

Other tools, such as Eccolab (www.Eccolab.co), combine energy, carbon, cost, and material modelling in one software; while materials2050 (www.2050-materials.com) offers a simple visual guide to the carbon impacts of specific building materials.

All of these tools rely on the data included in Environmental Product Declarations (EPDs). These are produced by specialists who assess the production process of any product, taking into account raw material and energy inputs and quantifying the emissions from manufacturing processes. They are third-party verified to ensure accuracy and consistency. Manufacturers in Ireland can contact the EPD Ireland programme, operated by the IGBC, to guide them through the process and advise on financial assistance available from Enterprise Ireland.

The demand for EPDs is growing, and there are multiple research teams investigating how best to integrate the data into BIM models for instant LCA results. Primarily driven by investors, environmental performance is playing an increasing role in the decision-making process in the same way that costs, availability, and ease of use have up until now. As environmental considerations become a key decision factor, through increasing client demand and legislation, competition to reduce impacts in production processes will grow.

To reduce whole-life carbon emissions, we need to optimise the quantity of materials used and reduce the carbon intensity of these materials. This requires WLC assessment, education and innovation.

Carbon emissions from the production of materials are often tied to the energy input of the process. Generally, the more energy needed in the production process, and the dirtier the energy supply, the higher the carbon cost of production, so the first step should always be to reduce demand. Cement for concrete is one big exception. Only some of the carbon emissions in cement are a result of energy input. Up to 60% can come from calcination – the chemical reaction that transforms limestone into clinker, the essential binding agent in most cements. This is why cement is such a difficult material to decarbonise – renewable energy will not address the whole problem.

In recent years, efforts have been made to replace as much cement as possible with GGBS or PFA, but these have their limits. Both are by-products of other carbon-intensive industrial processes that need to be reduced.

A promising recent development is the use of graphene. A team from the University of Manchester and engineering company Nationwide Engineering have successfully produced and installed graphene-based concretes that they claim reduce volume requirements by 30%, reduce the cement content by 50% and remove the need for steel reinforcements – another critical contributor to embodied carbon in reinforced concrete, lowering both carbon emissions and costs.

The University of Colorado has developed a method to produce limestone from algae to be used in carbon-neutral cement as the carbon involved was absorbed from the atmosphere as the algae grew, rather than being quarried and burned.

It is estimated that the use of timber construction frames and wood-based panels in Ireland avoids around 2.23MtCO2e (Megatonnes of carbon dioxide equivalent) of emissions per year in manufacturing conventional materials – or 4% of overall territorial emissions. A further 3MtCO2e is stored in long-life Irish-made products. Increasing the use of bio-based materials in an agricultural country like Ireland would have a corresponding positive impact on emissions.

Within the European Union, there are already exemplar businesses.

Ecococon has provided 20,000 sq metres of wall systems for homes, schools and other projects across the continent. Its panels meet Passivehouse standards and are made from 98% carbon-positive biobased materials; timber and straw. This year, Ecococon completed its first project in Ireland at Feakle in Co Clare.

ModCell offers a similar product, but rather than shipping wall systems, a temporary factory is set up close to site locations, reducing waste and increasing efficiency in production and installation.

In London, architects Waugh Thistleton have completed two residential tower blocks in cross-laminated timber (CLT), including the world’s largest, Dalston Works, a 121-unit residential development comprised entirely of CLT. It weighs a fifth of a concrete building of the same size, and deliveries during construction were reduced by 80%.

While it is possible for those who are determined, fire regulations and insurance for new and innovative approaches like these remain a challenge in Ireland, and solutions are needed in these areas to allow them to be competitive.

Innovation in materials is only one part of the jigsaw, and the above prototypes and ideas will take time to proliferate. Leaner design, where more is done with less, is needed now. We must specify only what is required and reshape grids and structures to maximise their strength and performance. A team of UK universities recently revealed a prototype building system that cuts concrete use by up to 75% by rethinking the floor. Building material passports and recertification also have a role to play in supporting greater reuse and hence reducing carbon emissions.

The overarching idea is to innovate and do more with less, using EPDs and WLC assessment to measure what we cannot avoid because what gets measured gets managed. If we can decarbonise supply chains through EPD competition, then we can encourage innovation and change and begin to address construction’s carbon footprint.

Regulatory and financial barriers need to be addressed to allow innovative products to gain certification and new industries to develop.

The new Construction Technology Centre at University of Galway offers an arena for industry to engage with research and innovation – it should be fully supported. The IGBC continues to work with members to assess what is needed and support their ideas.

Perhaps more than anything, after all the science and innovation, the most important thing will be awareness-raising and a change of mindset. All of us in the industry – financiers, planners, designers, contractors – need to ask how we can do things differently.

For further information on the Roadmap, the carbon modelling report commissioned to UCD, the Carbon Designer Tool or the EPD Ireland programme, visit www.igbc.ie/lca/

Arup director and IGBC #BuildingLife ambassador OONAGH REID speaks with Robbie Cousins about the challenges and opportunities she believes the Irish construction sector is facing in helping Ireland meet carbon emission reduction goals up to 2030 and beyond. Click here to read interview