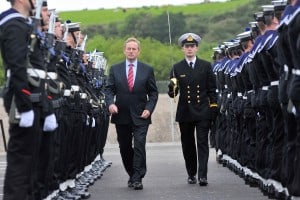 The ambitious development was led by UCC Capital Projects Officer Niall McAuliffe and employed more than 200 people on site. Designed to resemble a naturally eroded cliff face with incredible sea views, the architects on the project were McCullough Mulvin and the civil and structural engineers were ARUP. The main contractors appointed were JJ Rhatigan who won the contract by competitive tender process.

Speaking at the official opening, An Taoiseach Enda Kenny, T.D. said, “Marine research and development is a part of this Government’s plan to rebuild a sustainable enterprise based economy. Our seas will increasingly support more jobs, enterprise and research. The UCC Beaufort Building, while firmly rooted on dry land, is a vessel of scientific discovery for our seas. Its world class facilities will attract world class researchers and new entrepreneurial endeavours in the maritime and energy sectors. The spirit of collaboration between academia, private enterprise and the Irish Naval Service in Irish maritime research is a model for public – private partnerships not only in Ireland, but globally.”

The design team for the building is:

Our image shows An Taoiseach Enda Kenny T.D. at the official opening of the UCC Beaufort Building