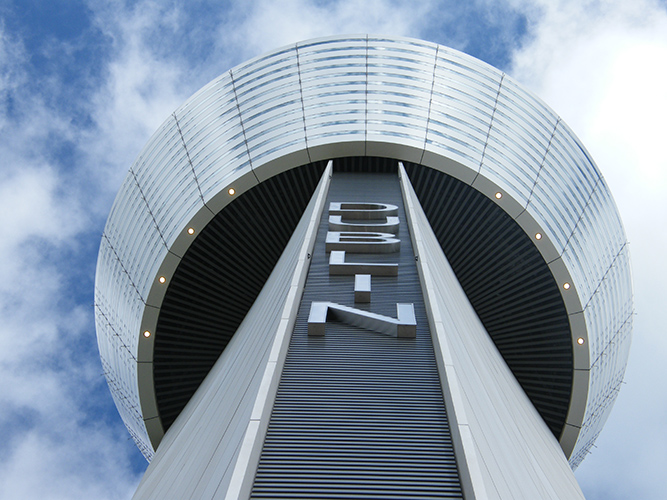 The new visual control tower at Dublin Airport is a landmark building on the Dublin skyline to welcome newly arriving visitors. At 86.9 metres high, it is the tallest occupied structure in the country. The height of the visual control tower structure was determined by the operational requirement for a control room floor level of 80 metres above ground level.

The new tower will be essential to allow air traffic controllers to cover both runways at Dublin Airport once the new North Runway is completed. 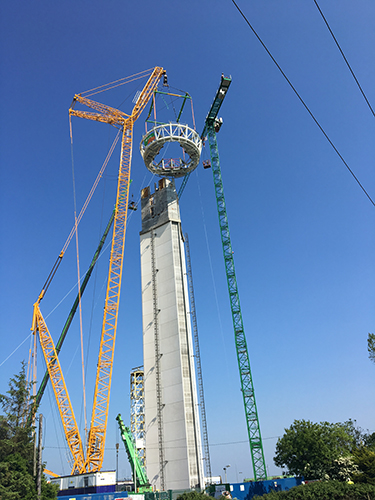 Installation of a 106-tonne steel ring.

The visual control tower with a gross floor area of 2,766 sq metres has three separate but integrated building elements.

The control cab structure comprises five levels and contains essential technical facilities/staff accommodation, plant space, technical equipment, maintenance facilities, and the visual control tower itself. The tapering cone shape of the cab results from the spatial requirements of the various functions at each level and their relationship (in terms of proximity) to the visual control tower.

The cab supporting shaft is triangular and derives from the three modes of vertical circulation from bottom to top; the two lifts and the single stairway.

The base building accommodates staff facilities, electronic systems and mechanical plant space to provide control of the building environment.

The project also included the demolition and removal of a derelict house, demolition and replacement of a car park, upgrade of security infrastructure, including significant service diversions, and a new landscaping scheme. 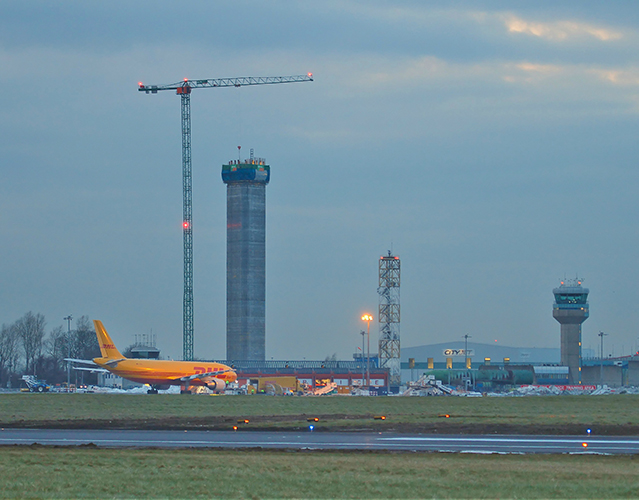 The construction of the new tower was completed by BAM in March 2019 to facilitate parallel runway operations. BAM had also constructed the original tower in 1990, which will remain operational for backup purposes.

Slipform construction was used for the construction of the stem of the tower. This involved pouring concrete from a continuously moving form 24/7. It was the single most critical aspect of the project. It required detailed planning and collaboration between the concrete supplier, mix design, the reinforcement supplier, the structure engineer, the steel fixer and the slipform subcontractor to guarantee the success of the slip, with the finishing of exposed internal walls progressing as the tower climbed. This, combined with pouring concrete in -4°C conditions, proved to be significantly challenging, but the slipform was completed ahead of schedule in just 20 days.

Concrete corbel at 70m above ground

During detailed reinforcement design, it was clear that a standard corbel design was insufficient. The three points of the triangular shape of the tower caused a significant design issue. Therefore, a combination of a traditional corbel on the longer elevations with cantilever wrap around transfer beams at the three shorter elevations/peaks of the triangular shape of the tower was implemented. This unique concept provided a sufficient load path to transfer the cab loads back to the columns constructed within the RC walls.

During construction, the unique nature of the reinforcement detail posed many challenges, including rebar installation sequence, workability of the bars and the bespoke tools to install and torque the reinforcement on the position couplers. BAM designed and manufactured customised tools for the construction of the corbel, and this, combined with skilled operatives, led to its successful completion.

Unique reinforcement design, working conditions 70 metres above the ground and formwork needing to be hung from above, the construction of this RC 700mm wide by 800mm deep corbel proved to be an extraordinary piece of engineering and workmanship.

BAM, as the engineering lead, successfully coordinated the team of concrete and formwork contractor, the steel fixer, the reinforcement and coupler supplier, the temporary works and formwork designer and the permanent works structural engineer.

Installed before the corbel to facilitate crane access, the curved white concrete precast cladding panels formed a key architectural feature of the building, and attention to detail was paramount. The panels were completed prior to the corbel above due to the geometry of the two components and the required sequential installation of the panels themselves.

Early detailed design of the panels permitted the integration of the 456 cast in fixing components into the slip-formed concrete core to hang and laterally restrain the panels. The installation tolerances for these cast-in components was +/- 10mm.

BAM assumed full control of the design approach and construction of the steel cab. The method involved fully embedding 12 steel columns into the slip-formed shaft with flat plate connections to weld the steel into place.

The works involved the complex installation of a 106-tonne steel ring. The 105-metre lift of the 106-tonne preassembled lower section of the visual control tower’s cab frame took place on 28 May 2018. The lift was carried out by BAM’s team of lifting experts using a Liebherr LR1600-2 crawler crane from Gabriel O’Brien Crane Hire. This lower section of the cab frame not only formed its first floor but also facilitated access for the construction of the rest of the cab at heights of 87 metres above ground level.

Airports are always located to take full advantage of the wind. During the project, there was a five-day stoppage due to a status red weather alert during the slipform installation.

The installation of the precast panels was also hampered by the windy conditions, the height of the works above ground and the large surface area of the panels. Using only the tower crane for installation, “wind windows”, including night-time works, were utilised using highly skilled operatives and a detailed lift plan, averaging installation of 10 panels per day.

Due to the tower’s height, two tuned mass dampers (TMDs) inside the tower absorb vibration energy. These are tuned to vibrate at the same frequency as the structure, reducing the sway of the tower and creating a positive work environment for air traffic controllers.

Concrete is the main component of the structure. The curved profile of the precast concrete panels proved to be a significant challenge in the workshop. Early design permitted 114 panels to be manufactured using only two moulds, which were repeatedly re-used to ensure consistency in the panels. This was critical during the installation to mitigate unplanned stoppages. Access for the installation of the panels was also a challenge during their design and, more specifically, the panels’ joints and fixing locations. Building the mast climbers in tandem with the panels facilitated the installation of the specifically designed ties through the joints. Using a hockey stick design, these mast climber ties were later removed without any impact in the panel, leaving a sacrificial galvanised anchor plate inside the cavity.

The structural steel frame of the cab area of the building cantilevering from the concrete stem provided several challenges, including extremely tight construction tolerances to receive direct fixing of the glass without a separate glass framing system and access challenges at 70 metres to 90 metres above the ground.

The façade and the glazing of the cab area have two distinct façade types. The façade used on the cab tower did not exist as a certified façade system, and BAM developed a new façade system that passes a full suite of CE certification tests in a very short period of time.

While IAA Technology and Operations were responsible for installation, commissioning and testing of associated air traffic management equipment and systems, BAM provided all internal finishes and infrastructure, including commissioning of building services and life safety systems. 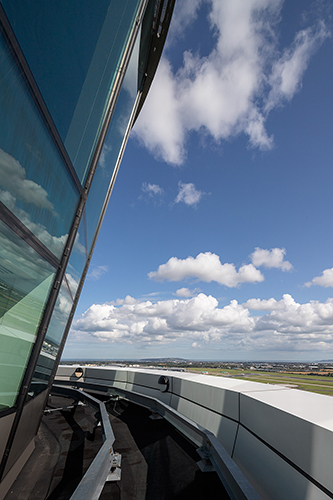 The bespoke façade of the cab enables 360-degree views of the airfield. 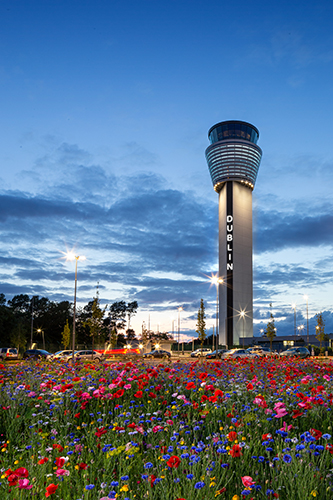 – Bespoke façade of the cab enables 360-degree views of the airfield to ensure that air traffic controllers have optimum views to enable efficient take-off s and landings. The size of the glass panels was maximised

– The tower lighting gives the control tower a distinct visual identity, with nine bands of multicoloured LED strip lights allowing a range of colours and visuals to be programmed to show on the façade by night