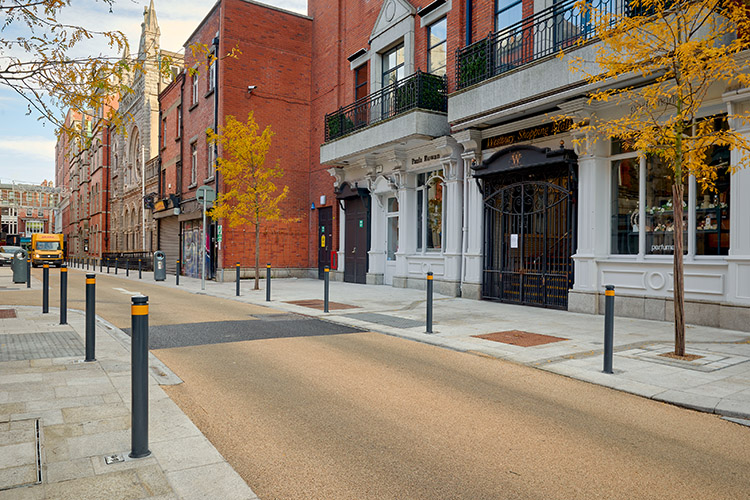 The Clarendon Street Area Improvement Scheme in Dublin city centre was completed by Actavo Civils Division in July 2020, a time when the capital had a growing need for more user-friendly city centre spaces.

Improvement works were initially carried out on Grafton Street, including Johnson’s Court and a section of Wicklow Street, in 2014.

In 2019, Actavo won the tender to carry out the next phase of the work, comprising a significant refurbishment of Clarendon Street, to the west of Grafton Street.

Dublin City Council’s (DCC’s) design intent for the works was to extend the “Grafton Street Experience” westward into Clarendon Street/Clarendon Row. As with other works in the area, it was also looking to follow universal design principles in making the street accessible to everyone.

Scope of the works

Ollie Raftery, Head of Civils, Actavo, explains that the scope of the works was for the excavation and reconstruction of the original asphalt carriageway and the repaving of the existing footpaths with new granite slabs and setts.

Prior to the works, Clarendon Street comprised an asphalt-covered street with narrow footpaths. Over the years, the footpaths and street had been patched up, as required interventions were completed.

The scheme narrowed and centred the carriageway creating wider footpaths and an improved pedestrian environment that can be accessed and used to the greatest extent possible.

Greening interventions within the scheme formed part of the broader greening strategy developed for the Grafton Street Quarter. The DDC strategy aimed “to establish local green infrastructure to address biodiversity, climate change and the built environment, while connecting elements such as parks and green corridors that run through and beyond the area, with the possibility for increasing social activity and fostering spaces of rest and tranquillity within this busy retail and restaurant quarter of the city.

The north end of Clarendon Street was paved flat, and the south end paved with raised kerbs. The use of kerbs is to protect the pedestrians in the loading bay areas, which are located between Coppinger Row and South King Street. In addition, the road surfaces at the junctions with Coppinger Row and Chatham Street were raised, and the surfaces were finished with a high-friction anti-skid surfacing material. This arrangement of materials and levels provided a safe pedestrian environment that can also accommodate the buses/coaches and servicing vehicles that use the street. The granite footpath surfaces were also sealed for ease of maintenance.

The scheme continued the suite of street furniture used on the earlier Chatham Street, Harry Street and Balfe Street scheme. The provision of seating is an essential part of a universal design approach, affording rest opportunities, particularly for people with disabilities and older people. These seating locations also fed into greening and tree planting plans outlined in the Grafton Street Quarter Greening Strategy.

Public lighting was upgraded with new public lighting fittings installed to match the LED fittings on Grafton Street. These were generally wall-mounted on the building facades. 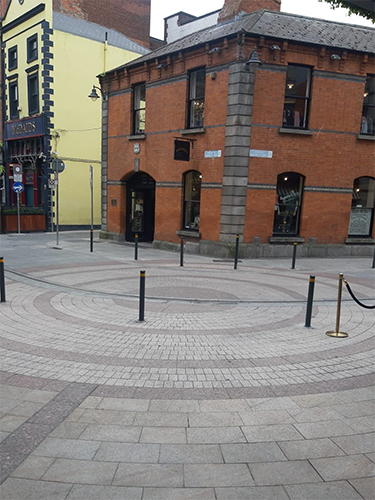 Actavo worked closely with emergency services and local businesses to ensure works had a minimum impact, including organising off-peak project deliveries and ensuring surrounding businesses could receive deliveries on time and without disruption.

Ollie Raftery explains that as Actavo had previously carried out upgrading works on adjacent streets, emergency services and local businesses were familiar with how they operated, and the team was well placed to deal with most issues that arose.

“Previously, we developed a good relationship with emergency services and businesses in the area when we had upgraded Balfe Street, Harry’s Street and Chatham Row. Because of the location of the street in the centre of Dublin city, we knew the importance of having a comprehensive stakeholder plan in place. This was not only for the benefit of local businesses; it was to ensure that emergency services and An Garda Siochana were also kept up to date on the work taking place.

“One issue that arose on the original upgrade projects was the discovery of uncharted shallow cellars. This came up once again on Clarendon Street. But we had a system in place, and when we were required to call in archaeologists, we moved to another part of the project while they completed their work.”

The project experienced delays due to the Covid-19 pandemic. It meant introducing additional health and safety requirements for working during a pandemic.

“Covid-19 added to the logistical challenges of the project at first,” Ollie Raftery comments. “But, once we had a new standard operating procedure in place, the reduced traffic and footfall on the street meant we could move more quickly.”

The on-site element of the project ultimately had a duration of 14 months, from May 2019 to July 2020. By the time it was completed, there was a growing emphasis on the need for user-friendly outdoor spaces around the city centre because of the pandemic.

The response to the upgrade of the street, particularly the expanded footpaths seating and new planting, was very positive.

Speaking about the project from Actavo’s perspective, Ollie Raftery comments that they were delighted with the outcome and how the works went.

“Actavo has delivered a high-quality area improvement project on time and within budget in a challenging urban setting and during a pandemic when we had to change our operating procedures completely. This was delivered safely with comprehensive Covid-19 operating procedures followed at all times. Most importantly, from a project management perspective, the engagement plan we had in place ensured that there was good local stakeholder engagement throughout the process of the work.”

Dublin City Council has since engaged Actavo Civils Division to install a number of Covid-19 mobility measures, including upgrading junctions and pedestrian crossings and installing several prolific cycle lanes across the city.

One such project was the installation of rapid-build slip-form kerbs to create purpose-built cycle lanes on Griffith Avenue to the north of the city, a project that took just two weeks to complete.

This work comprised excavating a trench with a narrow rock wheel and installing a kerb using a slip-forming machine. Once poured, the kerb was protected until the slipform cured. The project also called for the provision of drainage gaps along the line of the kerb. Actavo developed this method for trenching and installing a specially designed kerb to create designated cycle lanes on busy urban streets. The design was so successful it has been adopted by Dublin City Council for use elsewhere.