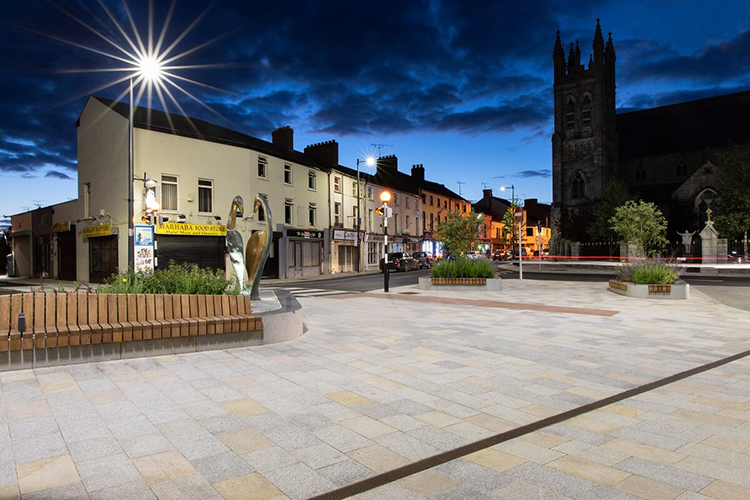 Rejuvenating the historic heart of Dundalk

The official opening of the Clanbrassil Street/St Nicholas Quarter Public Realm Rejuvenation Scheme in Dundalk took place in September of 2020. The scheme was completed over 12 months by John Cradock Ltd (JCL). The works comprised the provision of new widened asphalt footpaths and parking bays and new asphalt surfacing on Clanbrassil Street, planting and seating areas, upgrading of public lighting, improved pedestrian crossings points and a decluttering of footpaths. It also included the undergrounding of overhead ESB cables and the provision of new ducting for various service providers with spare capacity for future service needs. Additional works comprised the installation of water meters to properties on the street and replacing existing water mains at the northern end of Clanbrassil Street with a new 200mm water main, in partnership with Irish Water.

The full brief from Louth County Council for the latest scheme included:

– Upgrade 540 metres of Clanbrassil Street from Market Square to St Nicholas Church, with the works extending 80 metres each into Bridge Street and Linenhall Street. The overall area was more than 12,000 sq metres, of which approximately 7,000 sq metres was new granite paving, with the remaining area comprising asphalt to parking bays and on Clanbrassil street

– Upgrade major services with substantial underground ducting to move above ground ESB lines underground, as well as ducting for other utilities, including Eir and Enet

– Install new public lighting across the length of the scheme

– Complete hard and soft landscaping throughout.

The works programme was facilitated by a comprehensive stakeholder engagement programme comprising weekly meetings with a stakeholder representative.

JCL director Victor Smyth says that good communications and ongoing engagement with the employer and other stakeholders are critical factors in successful urban development projects.

“We met weekly with the employer and a liaison officer appointed by local businesses. The liaison officer was the point of contact to keep people informed on ongoing and planned works, to get their input on the project, and to deal with any concerns raised.”

The programme strategy was to have no more than 100 metres opened up in any one area at a time and for the works to move forward only when the finishes were being completed behind.

“The main works focus of the project was the removal and replacement of the footpath surfaces and the laying of ducts and services along all new paths,” explains Victor Smyth. “This included moving ESB services below ground as well as upgrading public lighting, traffic and pedestrian lights, crossings and junctions. The roadworks comprised primarily milling the original surfacing, regulating works and replacing with a new asphalt surfacing course. These works were programmed at the latter end of the project when the footpath works were well advanced.

“We began work on the southern end of Clanbrassil Street at the Market Square area, which we had completed in 2011, then worked northwards finishing footpaths as we moved forward,” he continues. “The main works involved excavating out original paths and subgrade, installing ducting, filling to formation and then finishing with the new surfaces. We maintained access to all properties using a series of temporary ramps and footbridges and had a dedicated person assigned to oversee traffic and pedestrian management. A one-way traffic system for traffic flows was implemented along Clanbrassil Street for the duration of the works as sufficient room to maintain two-way traffic was not available.”

The project design was carried out by BDP Architects and engineers Roughan & O’Donovan on behalf of Louth County Council, with Carron and Walsh employed as quantity surveyors for the project.

St Nicholas’ Church at the from the north end of Clanbrassil Street, Dundalk

Granite footpaths with seating and landscaping on Clanbrassil Street.

“Existing furniture on the route of the works was identified for potential reuse by the client,” Smyth adds. “This included lighting, street furniture, bollards, etc. These were passed on to the employer once removed. The employer was keen to reuse material wherever possible, and original granite was reused to delineate the on-street parking bays. Uncontaminated fill material that had been in place as subbase under footpaths was allowed for reuse by the employer.”

Speaking about the completed project, Victor Smyth says: “John Cradoock Ltd is delighted to have been able to have been the contractor on another landmark project in the heart of Dundalk. The collaborative approach of engaging closely with Louth County Council and local businesses really paid off in terms of the smooth transitioning of the works through the project. We were also delighted to see that many of the businesses along the route took the opportunity of the works to upgrade their facades, so much so that the whole area has been transformed.”

Speaking at the official opening in September of last year, the Cathaoirleach of Louth County Council, Councillor Dolores Minogue, said:” I am delighted to officially open the Clanbrassil Street and Saint Nicholas’ Quarter Rejuvenation Scheme, which has been designed and constructed to the highest standards and will bring new life to the centre of the town.”

Louth County Council chief executive Joan Martin said: “The completed scheme is very welcome, and it has transformed the main spine of the town, as well as making it more attractive for investment, and increasing visitors to the town. The scheme has been a catalyst for the redevelopment of existing buildings along the street, and the recent painting of shop fronts has complemented the rejuvenation scheme.”

With a project value of €5.5m, the Clanbrassil Street and Saint Nicholas’ Quarter Rejuvenation Scheme was a partnership between the Northern and Western Regional Assembly and Louth County Council, with European Regional Development Fund assistance through the BMW Regional Operational Programme 2014-2020.

JCL has the capacity and capability to project manage and construct civil and building projects. Its team has vast experience working for public and private clients on roads and bridges, urban regenerations, water and wastewater projects, pharmaceutical schemes, coastal protection works, etc. It has NSAI accreditation in safety, health and environment, as well as in quality management systems.

JCL has several projects ongoing at the moment. In Co Meath, it is currently on site with an urban renewal scheme in Navan and a roads project in Laytown/Bettystown, both for Meath County Council. It is also carrying out work in Howth/Balbriggan/Malahide for Irish Water as well as a joint venture scheme with Jons Civil Engineering for Hines in Cherrywood, Dublin. In Co Cork. JCL has another joint venture with Jons Civil Engineering ongoing on the N22 Macroom Bypass, and it has just finished a roads project for the IDA in Plassy in Co Limerick.