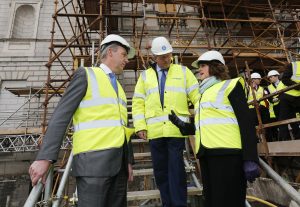 As the date for General Election 2016 is announced for Friday 26th February, the CIF is calling for the new Government to create a Minister for Infrastructure and Construction.

Speaking today as the CIF publishes its election manifesto, Director General Tom Parlon said “I believe that the next Government must do better to address the housing crisis, the growing skills shortages and the infrastructural bottlenecks throughout the country.”

He went on to say:

“As you have no doubt heard, the General Election was called by Taoiseach Enda Kenny today, dissolving the 31st Dail.  The Election will be held on 26th of February. An analysis of the of polling data trends, constituency changes, and a comparison of Party issues on some of the main Construction related issues is available on our website here

You will have already received in the post a copy of the CIF election manifesto canvassing document. This has also been issued to candidates running in the Election.  We encourage you to use this as a basis for outreach to your local representatives. This is also available for downloading on our website here

The document outlines seven key priorities for the new Government, and the solutions that the construction industry have on hand to meet these objectives. These are: Economic Growth, Job Creation, Investment in Infrastructure, Supporting FDI, Solving the Housing Crisis, Increasing Office Space, and Career Opportunities for the Irish Labour Force.

I believe this is a robust and credible guide for political candidates in the upcoming General Election, and sets out the goals and objectives that we in the industry want to see implemented in the next Programme for Government to grow the construction industry.

Additionally, a larger manifesto document outlining in greater detail all of our policy asks of the next Government has been issued to Party Policy makers and civil servants.  This document is also available on our website here

I believe that the next Government must do better to address the housing crisis, the growing skills shortages and the infrastructural bottlenecks throughout the country.  In order to do this, we are calling for the Government to create a Minister for Infrastructure and Construction.

Today we are asking all election candidates to really understand the crucial importance of the construction industry in delivering the economic growth they are all talking about and planning for.  Our experience in recent years is that there is a lack of joined up thinking in relation to issues surrounding construction.  Issues like housing, planning, procurement, transport, communications, flooding, and ensuring sufficient skills to protect the recovery are scattered across at least 6 different Ministries.  That is why we are calling for a new seat in Cabinet for a Minister for Infrastructure and Construction.  We believe that there is a growing need for action from Government to ensure all agencies and departments coordinate to sustain a thriving construction sector.

Our industry now employs approximately 130,000 people and this is growing at a rate of about 1,000 jobs per month.  It is likely to generate a turnover of €15 billion in 2016.  This excludes smaller schemes and self-build/residential extensions, which could account for a further €3 billion. Yet right now it accounts for only 7% of GNP, but we want to see this raise to 12%.

Over the coming months, we will cooperate closely with all of our members to move forward these Governmental ‘Calls to Action’ as outlined in our Manifesto.”