Following on from the graduate & apprenticeship supplement in the March/April issue of Construction, we examine how CIF member firm Mercury Engineering nurtures its staff, from first career step through the years that follow.
The list of projects Mercury Engineering has worked on include high profile developments like Dublin Airport’s T2, the National Convention Centre, the Corrib Gas facility in Mayo and the Aviva Stadium. To complete such prestigious projects takes a professional staff fully committed to the challenge.
“What Mercury has to sell is our name and our experience,” says Frank Matthews, a Director with Mercury who has worked with the company for 37 years. “Most companies can buy materials so the key differential we have is our people.
“If you train and look after your staff the return will be the commitment they give to the company and the project they’re working on,” he explains. “The success of Mercury is built on this philosophy, that most people will return the investment.”
For a company employing over 1,800 staff keeping them fully trained and allowing them advance their careers through education is a costly business.
“It’s important that we train people in what we call ‘the Mercury way,’” says Frank. “There is huge effort put into both the apprenticeship and graduate programme.”
It’s about offering people an attractive package, he says. ‘Stick with us and we’ll look after you’ sums up the philosophy.
“We give people the opportunity to travel throughout Ireland and Europe,” he says. “It’s something that graduates want – that they could end up working in, for instance, Sweden or Amsterdam.”
Mercury is also one of the biggest employers of apprentices in Ireland over the past 30 years. It’s testament to the programme that many of the company’s senior personnel served their time with Mercury before moving through the ranks.
One such person is David Byrne. Currently working as Bid Manager with Mercury, responsible for estimating all jobs in Ireland and Europe, David started out with the company 20 years ago as an apprentice.
“Actually I started out in the estimates office but went on to become an apprentice,” he explains.
“It’s a great way to learn about the business ‘from the ground up,’” he says,
He spent his apprenticeship on various sites, including Intel. “I enjoyed my time as an apprentice, there’s a crew mentality that’s great,” he says.
“The foremen on jobs would know I had computer skills so I would be asked to help out pricing jobs.”
“I qualified as an electrician in 2000 and after a few years working on various projects I moved back into estimating. The fact that I had served my time meant I had ‘site knowledge’ which really helped working in the office.”
Over the following years David worked in London as a senior estimator and as a ‘QS’ at the Intel project in Leixlip. He returned to college where he secured a Diploma in Legal Studies, which propelled him into a Post Grad Diploma in Construction and Contract Law in Trinity College, Dublin.
David is currently studying for a Masters in Quantity Surveying in Bolton Street.
“Mercury is great for supporting staff that want to enhance their careers through study,’ he says. “If you show initiative they will back you all the way. The company is very focused on future development of its team.”
As Frank mentioned, the nature of working for Mercury Engineering means there can be travel involved. David moved to the London office in 2010, where he spent time in the estimation department “flying back to Dublin on a regular basis”.
Now his senior position with Mercury means he is involved in all the tenders submitted by the company. “All our estimators have a trade background,” he says. “Nothing beats that ‘hands on’ experience when it comes to pricing a job.”
The final word goes to Frank Matthews: “People are the unique selling point of this company,” he says. “It’s up to us to give them the right training and respect.”

In their own words…..

Graham Casey (main picture)
“I’m working as an electrical charge hand on various jobs around Ireland, which means I’m on the road most of the time. Last year I worked on the Kerry Foods project in Naas.
When I was serving my time I found that on smaller sites you had to do everything, where on the bigger jobs you specialised in one area and became really good at that. I think the smaller the better when you’re starting out.
I worked on a bank project where three of us had eight weeks to finish the job. We did the fire alarm system, the lights, everything. It was a great learning experience.
Now I’m studying Computer Science in Kevin Street. The industry is becoming more computer-based, so this qualification will really stand to me. Mercury are really good at keeping on top of your training – they even had me doing a forklift course!
I remember my first day with Mercury – we started at 7.30am and were due to finish at 4pm. We didn’t get out until 8pm, which can happen in this business. You’ve got to put the hours in when it’s needed.
Sure, it’s hard work, but you get the rewards with a secure job and good pay.”

Elena Martin
“I’m currently working in The Netherlands as a Graduate Electrical Engineer. I served my time as an electrical apprentice with Mercury so I’m one of the people who moved on through the ranks. 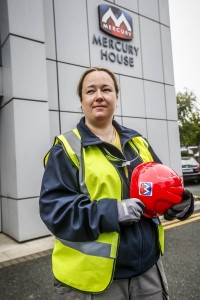 I went back to Kevin Street to study Electrical Engineering at night. It was tough going but worth it in the end. Because of the apprenticeship I was able to skip the first year.
I would say that working with Mercury is about stretching and challenging yourself. There are lots of opportunities and the graduate programme is really interesting. It’s run over two years alongside your normal work. The programme includes lessons on presentation skills, at the end of which I’ll have to give a presentation to Senior Management.
Mercury invests a lot of time and money in their graduates. If you put the effort in and work hard they acknowledge what you’ve achieved. There are lots of opportunities.”