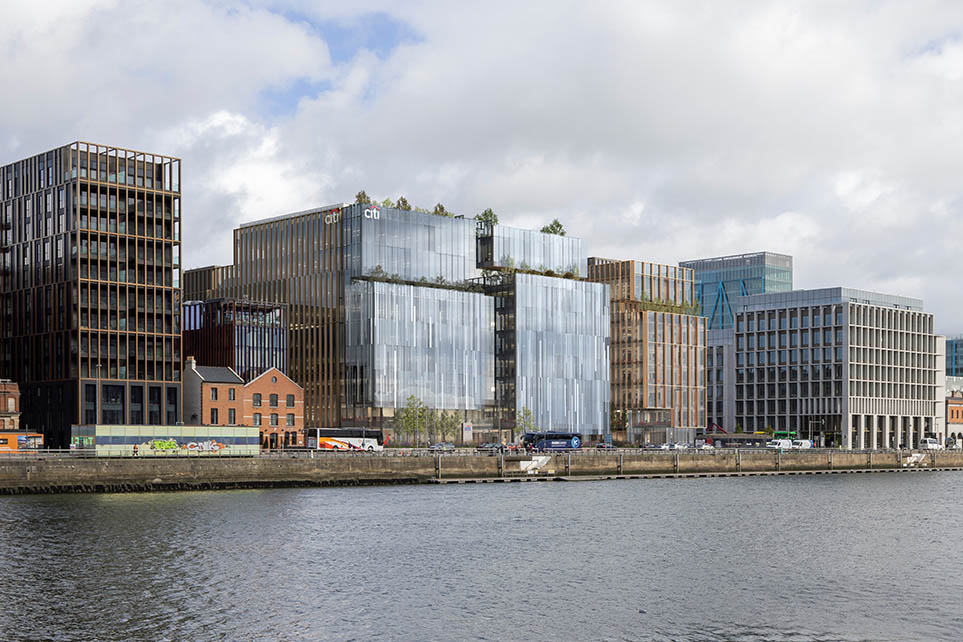 The nine-storey future home of Citi in Ireland will come complete with roof terraces overlooking the river Liffey and Dublin’s wider cityscape. Ronan Group is also planning to develop an additional 200,000 sq feet of offices at the site.

Ronan Group has also purchased Citi’s current Dublin premises at 1 North Wall Quay, a short stroll from Waterfront South Central. When Citi’s workforce is ready to move into Waterfront South Central and vacate their current premises, Ronan Group will then take ownership of the building, with plans being put in place to transform the building into a 500,000 sq-foot landmark commercial premises, the ideal future home of any global blue-chip organisation looking to base itself in the heart of Dublin city and the European Union.

The purchase of Citi’s Dublin premises is a landmark deal and a collaboration between RGRE and Stefan Jaeger’s new company Landfair, as funding partner. It continues the successful partnership and long-standing relationship between Jaeger and RGRE, which included the delivery of Irish and European headquarters for Amazon, Salesforce and Meta, driving the positioning of Dublin as the leading tech capital in Europe.

Davinia Conlan, interim Citi Country Head for Ireland, said: “We are thrilled to have finalised the location for our new building in Ireland. Our aim is to develop a state-of-the-art, sustainable workplace with the highest standards of design and technology. This significant investment is a signal of our commitment to Ireland, to Europe and to our people.

Welcoming the dual deals, Rory Williams, CEO, Ronan Group, said, “The choice of Waterfront South Central (WSC) as the future home of Citi in the European Union represents a major vote of confidence in the continued strength of the Irish economy. This demonstrates the increasing desirability of Dublin as a European base for leading global companies, especially in the financial and banking sectors. Dublin is now the leading English-speaking city in Europe, with unrivalled connectivity to English-speaking countries in North America and the UK, while remaining firmly centred in the European Union.

“Ronan Group’s expertise in delivering world-class buildings has also received a vote of confidence, as demonstrated by the institutional backing of our transaction to redevelop Citi’s current HQ at North Wall Quay, where we aim to develop over 500,000 sq feet. of best-in-class commercial space, as we continue to lead the way in regenerating this area of Dublin.”

Works at Waterfront South Central (WSC) have commenced and are expected to complete in 2026. Upon completion, Citi’s offices will have underground carpark with EV charging and will aim for the highest efficiencies, with accreditations to include LEED Platinum, Wiredscore Platinum and WELL Building Certification, in keeping with Citi’s target of being Net Zero in its own operations by 2030. WSC represents the last major site in Dublin’s Docklands to be developed, and the latest from Ronan Group, who have extensive experience in the locality, having recently delivered Salesforce Tower and the Samuel Hotel at Spencer Place.

The wider development will have up to 1.25 million sq feet of commercial, residential, hotel and other uses and will include several public and community spaces, such as a waterfront town hall space and farmer’s market, as well as numerous on-site amenities, including cafes, restaurants, and creche facilities.

Elsewhere, together with NAMA, Lioncor and Oaktree Capital Management, Ronan Group is developing the Glass Bottle site on the Poolbeg Peninsula, with the potential to deliver approximately 3,800 residential units, including 25% social and affordable, and 1 million sq feet of commercial space, with extensive community open spaces.