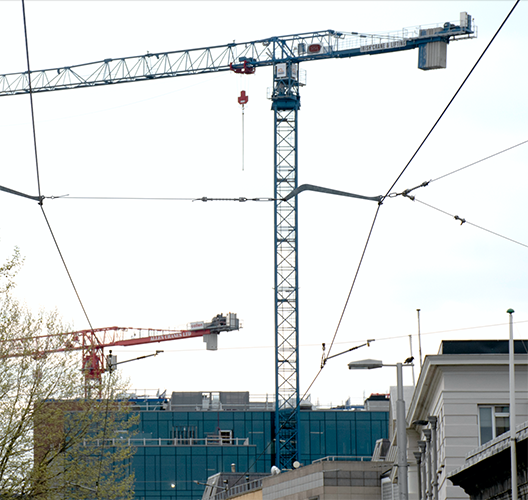 The March Construction Industry Index, published by BNP Paribas, indicates that the sector continues to grow but at a much slower rate than in previous months.

Rising building materials costs are really biting, as the index dropped to 53.9 in March, which, while still above the 50.0 no-change mark, is a 4.5 point drop from the 58.4 reading of February.

Housing and commercial construction sectors saw the largest rises in activity, but civil engineering activity dropped for the first time in five months.

The explanation for the softening growth is “straightforward” according to BNP Paribas head of research John McCarthy,  “Arising from supply chain issues and sharp hikes in oil and gas prices, building firms experienced the second-fastest growth in input costs since the index began 22 years ago,” he said.

The monthly construction purchasers managers index (PMI) survey was gathered from responses to questionnaires sent to a panel of around 150 construction companies.

A similar picture was evident regarding new orders, which increased solidly but not at a rate seen in previous months.  With a reading of 54, the new orders sub-index continued to show expansion. However, this was the lowest level of order book growth in more than a year.

Construction companies themselves also indicated that they had been looking to stockpile materials in advance of expected price rises and supply problems. As a result, purchasing activity increased solidly, but the rate of expansion eased.

The conflict in Ukraine, higher transport costs, and material shortages all added pressure on supply chains.

The survey found that lead times on the delivery of inputs lengthened substantially, with the rate of deterioration worsening for the first time in five months.

The impact of rising prices on customer demand led to a sharp drop in sentiment at the end of the first quarter. Despite the decline in confidence, higher new orders encouraged construction firms to increase their staffing levels again in March. But the rate of job creation eased to the slowest since April of last year. A weaker rise in the use of subcontractors was also registered, while their availability continued to decline markedly.