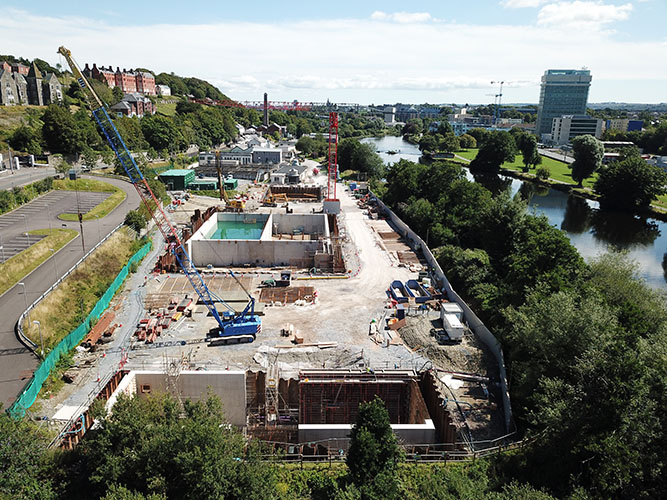 The scope of works includes upgrading the existing WTP from its current capacity of 36,200 cubic metres per day, to a new plant with approximately 40,000 cubic metres over a 18-hour-period, as well as associated testing, commissioning and operation of the plant for a one-year.

The six underground reinforced concrete tanks require a number of major excavations, which, in turn, require structural support while the permanent works are carried out.

For this, Murphy International have employed Groundforce to supply its modular hydraulic props and waling beams, to support the steel sheet-piled cofferdam walls.

Groundforce equipment arrived on site in February of this year, when work started on the first cofferdam, which will accommodate the reservoir tank. Measuring 48m x 30m, x 5m deep, this excavation was supported with a cofferdam, comprising 10m-long Larssen L605 steel sheet piles driven to a design toe depth, 4m below formation level.

To support the cofferdam, Groundforce supplied its hydraulic Super Mega Brace as a waling beam around the top of the excavation, and then installed four MP250 modular hydraulic props across each of the four corners to provide lateral support. A fifth MP250 prop spanning the full 30m width of the excavation was also installed. This unit employed Groundforce’s 1.2m-diameter “super tube” extensions, as an alternative to the standard 600mm-diameter tubes. The larger tubes provided the extra stiffness necessary to allow the prop, to span the full width of the excavation, without the need for any intermediate vertical support.

“Byrne Looby’s design allowed for the removal of our frame, following installation of the 0.8m-thick base slab,” explains Groundforce general manager Joseph Lenihan. “This design feature was of considerable benefit to the scheme, because it led to reduced hire costs and provided for a clear opening, in which Murphy International could cast the reinforced concrete walls of the tank in one lift” he adds.

The works involved the installation of 10m-long Larssen L605 steel sheet piles for the cofferdam which proved challenging due to the dense gravels encountered, made driving the sheet piles difficult. Pre-augering along the line of the sheetpiles to the toe depth, did help with the installation.

With the temporary works established and excavation progressing on the reservoir tank, work started in March on the second cofferdam for the filter washwater holding tank, measuring 32m x 15m x6m. This was followed in sequence by the 26m x 18m x 6m raw water pumping station cofferdam in June. Both excavations employed the same engineering solution as that used to good effect to support the reservoir tank cofferdam.

With three major excavations completed so far, Murphy International have two more excavations to complete over the coming months.

Seamus Corridan, CSA Project Manager for Murphy International said: “The Lee Road WTP site, located on the northern bank of the River Lee just upstream of Cork city centre, provided numerous engineering challenges, due to a tight site where some of the deep excavations were adjacent to the site boundaries, poor ground conditions, a high groundwater level, and highly permeable soils.

“The detailed design for each of the cofferdams, involved the installation of sheetpiles, and a Groundforce shoring system. The Groundforce team were always extremely helpful to deal with, right through from design stage where they provided innovative & cost-effective solutions, to the installation/removal process where they were always available to provide guidance and hands-on experience.”

Joseph Lenihan concludes: “Groundforce are delighted to be involved in the temporary works element of this critical infrastructure project. The temporary cofferdams required on this project are some of the largest seen on the island of Ireland in recent years. The solution proved economical thanks to effective collaboration between Murphy International, Byrne Looby and Groundforce.”