Groundforce has played an important supporting role in the installation of a new display screen for a Hawk-Eye ball-tracking system at Semple Stadium, Thurles, Co Tipperary.
The Hawk-Eye system has revolutionised referee decision-making in many sports, from football to tennis via cricket and even snooker. Now it’s about to make its debut in the Irish sport of hurling following successful trials last season.
Main contractor JJ O’Sullivan was employed by the GAA to build a new retaining wall and floor slab in the corner of the Semple Stadium’s O’Lally’s Stand to accommodate the new Hawk-Eye screen.
Excavation was carried out by specialist subcontractor ESK Plant Hire and Groundforce was drafted in to provide structural support during construction of the retaining walls. 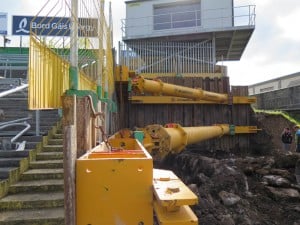 Although a relatively small excavation, the support requirement was complicated by the fact that it was two-sided and dug into the steeply sloping profile of the stand.
With the longer of the two sides sloping from +4m to 0m in depth, Groundforce developed a solution combining multiple level frame, propped cantilever, and cantilever designs to maximise efficiency and make best use of the restricted space available.
Two levels of the company’s Mega Brace frame were employed to support the sheet-piled retaining walls, with additional support provided by two KSK80 knee braces. The final excavation measured 15m x 7m with a maximum depth of 4m.
Using an ICE 328B excavator mounted piling hammer, supplied by Groundforce, ESK drove a combination of 6m, 5m and 4m interlocking GFI interlocking sheets to full depth and ESK then lowered the excavation to the level of the first frame, which was installed and welded to the sheets.
ESK then continued the excavation to the level of the second Mega Brace frame which was also installed and welded in place. The excavation was then lowered to formation level and the concrete base slab cast against the sheets.
Once the base slab had reached sufficient strength, the lower frame was removed and formwork installed for the permanent concrete wall.
O’Sullivan then poured the concrete for the wall up to the underside of the top frame which was also removed once the concrete was up to strength. With the sheet piles now acting in cantilever, O’Sullivan could then pour the wall to its final height.
“The geometry of the excavation made this job unique,” says Groundforce project manager Joseph Lenihan “The use of all three support systems – multiple frame, propped cantilever and cantilever – was quite novel.
“As the depth to be retained was gradually reducing from 4m to zero on the stand side, the second level of frame from the high section ended up being the top level for the lower section,” he adds.
Irish contractors are increasingly turning to Groundforce for engineered solutions to challenging projects and both ESK Plant and JJ O’Sullivan have worked with Groundforce before.
“Our crews are very familiar now with this specialist equipment and combined with Groundforce’s design capability, we are successfully providing solutions to complex excavation issues such as this,” says ESK’s commercial manager Tom Holland.
The Semple stadium in Thurles is expected to be the first of many to have Hawk-Eye installed permanently. Paraic Duffy, director general of the GAA, said: “Ideally, you would have it in every ground but Thurles is the next ground it should be in because Thurles stages so many of our big hurling games.”