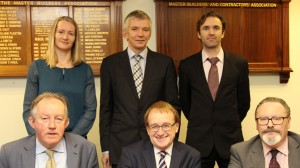 A recent CIF breakfast briefing heard that disposing of construction demolition waste (CDW) will become a huge issue for the construction sector over the coming years.

As the construction sector ramps up production there will be a consequent increase in waste material produced. Back in 2007, at the peak of the last construction boom, over 18m tonnes of construction waste was produced. To put that in context every house and business in Ireland produced just 2m tonnes of waste that year.

Consultants RPS argue the construction sector is facing a very different waste landscape as it heads into a growth phase.

Speaking to Construction RPS Director PJ Rudden says there is a dramatic difference between then and now.

“Ten years ago we had no shortage of landfill sites for disposal of CDW,” he says. “But with a change in policy we’ve gone from a total of 30 landfill sites in the country to just five.”

After 2017, when the Poolbeg Incinerator is built, lack of landfill sites in the capital won’t be a major cause for concern as the new facility will be able to cope.

However, it’s clear that landfill as a waste solution is on the way out. For the regions, the remaining landfill sites are far from major centres of population and trade. So what’s the solution?

“We need to develop a CDW circular economy,” he explains. “The industry faces a huge challenge but with challenges comes opportunity.

PJ says over 98% of CDW can be recycled: “why not heat hospitals in Dublin instead of Stockhom,” he asks, referring to Ireland’s current model of exporting waste.

Europeans are making a business from CDW and it’s possible for the Irish construction sector to so something similar.

“There are solutions, the construction sector could reinvent itself in terms of sustainability,” he says. “Larger contractors could come together to form an ancillary operation, which would improve their green building credentials at the same time.”

With district heating installed from The Point to Heuston Station the momentum is towards a greener Dublin. Taking advantage of CDW would play into that new scenario.

“This can be a good news story provided the industry sets itself up to deal with it. It’s an opportunity to reinvent ourselves,” concludes PJ.

The Construction Demolition Waste Council established by the CIF over ten years ago needs to be revisited and it terms of reference enhanced, says PJ. He also cites the recent publication of three regional waste management plans as the precursor to making reusing CDW a priority for local authorities.