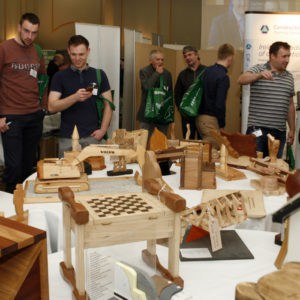 Construction at TechnoTeachers Conference and AGM

The TechnoTeachers Association’s National Conference and AGM played host to the launch of a new partnership between the Association and CIF and also saw the launch of the website, , apprentices.ie

At their National Conference and AGM in the Heritage Hotel, Portlaoise, Tony Harrison, Chairperson of the TechnoTeachers Association explained how members were very excited about their new collaboration with CIF “as it seems a natural fit”.
“The subjects we do,” explained Harrison, who teaches at Gortnor Abbey, Crossmolina in County Mayo, “feed directly into various parts of the construction industry.
“We teach people who go straight into college to study the various disciplines in this area. In addition, a number of our members would have worked in construction-related industries. Many, over the years, have come from an apprenticeship background into teacher training.”

Addressing the gathering, he spoke about how much Ireland has changed over the past 100 years – since 1916. And yet, he noted, some things remain constant. A set of basic skills needs has essentially remained unchanged over the years such as those associated with constructing, maintaining and modernising buildings, he said.
Harrison added that the acceptance of this reality is reflected in commitments to promoting apprenticeships as a vital component of education for future employment.
When it came to apprentices.ie, Tony Harrison said: “the TechnoTeachers’ Assoication is delighted to be associated with the launch of this CIF-sponsored initiative”.
There is no doubting that the talent is out there in abundance, agreed all in attendance.
Commenting on a display of student woodworking, Ray Madden from sponsors Xthratherm said he was delighted to be involved and that there were a lot skills in evidence. We are delighted to nurture this.”

CIF Director General, Tom Parlon, said that the collaboration made complete sense and spoke about the recognition of skills in schools, whether this be in sports or other areas.
“The skills here are superb,” he said, referencing the displays, “and to identify them is very important.”
Tom Parlon said that CIF was delighted with the collaboration with the TechnoTeachers’ Association, and to launch the website.
There had been a lack of information out there, he said for young people who might want to get into this particular area.
Referring to the recent DKM report, featured in this issue of Construction, Tom Parlon noted that many extra people will be required to work in the industry. "It’s a massive opportunity,” he said.
The conference played host to a number of exhibitors with presentations, demonstrations and talks taking place in a lively and upbeat setting. As our pictures show!

The TechnoTeachers Association has been in existence for over 30 years representing and supporting teachers of traditionally woodwork and drawing, which today has become: